Celia Reynolds fought back tears as she faced a wall of news cameras.

“I want justice,’’ said Reynolds, 76, who was raped 39 years ago in a still-unsolved attack she says the Memphis Police Department never took seriously.

“My whole life has been turned upside down.’’

Reynolds was one of several sexual assault survivors who showed up Thursday, October 20, at the Shelby County Courthouse to listen to arguments in a long-running lawsuit accusing MPD of negligence in the handling of thousands of rape cases over the course of decades.

Emotions flared, too, inside the courtroom of Circuit Court Judge Gina Higgins.

“It is indefensible,’’ argued Gary K. Smith, lead attorney in the suit filed in 2014 against the city of Memphis.

The suit came months after MPD announced it had found more than 12,000 rape kits scattered in storage rooms across the city. Lacking a master inventory, the evidence was in such a state of disarray that critics labeled it, “The Mess.’’

Many of those kits collected between the 1980s and 2013 had never been tested for DNA, evidence that could have positively identified perpetrators, some who struck again and again.

Arguing for the city, attorney Jonathan P. Lakey said the plaintiff’s claims are without merit.

“There are a number of legitimate investigative reasons for not testing a kit,’’ Lakey told the court.

Before Memphis police gained access to an FBI database known as CODIS in 2002 or 2003, Lakey said, kits with an unknown suspect weren’t submitted for DNA testing because there wasn’t anything to compare the DNA sample against. In other cases, police lost contact with victims, Lakey said.

Judge Higgins heard arguments Thursday for and against the city’s motion for summary judgment. She also heard arguments about the plaintiffs’ motion to certify a class of claimants to make the case a class-action suit.

Higgins took the motions under advisement. A ruling isn’t expected for some time.

Meanwhile, the hearings resume Friday when Higgins will hear the city’s motion to exclude testimony of former MPD sex crimes detective Cody Wilkerson, who contends that incompetence and indifference led to a “significant percentage’’ of sex crimes investigations being closed without any DNA testing or shut down even after DNA tests identified a suspect.

The city has spent more than $1.5 million defending against the suit and a second, now-dismissed lawsuit filed in federal court.

Reynolds said the city needs to quit fighting the victims and give them a measure of justice.

“The city needs to give me justice.’’ 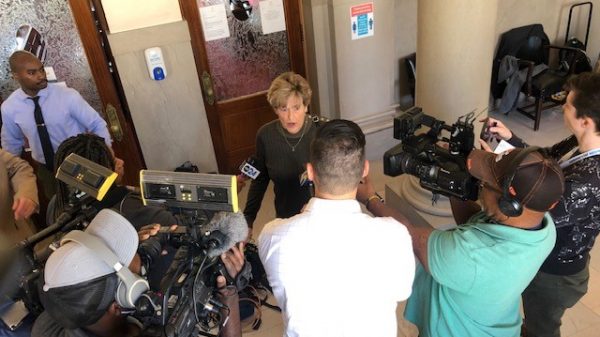