Here at the National Civil Rights Museum, Carolyn Payne is processing not just the loss of her brother, but how the memory of him has diminished.

Back in 2018, during the 50th Anniversary commemoration, he was the focus of an extensive exhibit.

She arrived last week to find it in storage, and a brief description in its place.

“That just knocked me down,” Payne said. “I wasn’t expecting that, and it hurt me to the core.”

By the end of the morning, museum president Russ Wigginton committed to seeking out family photos and oral history surrounding Larry’s death.

“Because they had the courage to reach out and share their disappointment and frustration, it set us up to have a next-level relationship,” Wigginton said.”

Payne’s death, March 28, 1968, was on the same day that a demonstration by Memphis’ striking sanitation workers had turned into a clash between police and protesters.

Officer Leslie Dean Jones suspected Payne of looting, and chased him into a room connected to the courtyard of his mother’s apartment complex.

When he emerged, the officer shot him. The police report says he had a knife. Witnesses say he had both hands on his head. Ryan Jones, the museum’s educator and lead tour guide, said his death is a familiar story in America.

Though a civil suit by Payne’s parents was unsuccessful, Carolyn wants to carry on the fight. Her sister Macie Payne Wade wants a documentary done about his life. And her niece, Ava Smith, wants to raise awareness about the mental health impact of killings by police on children. She was 10 years old when he died, but recently was still seeking counseling.

“So we have to, as people, come together and not just forget about the people who weren’t doing anything to harm anybody,” Wade said. “Just a police stop and you die. That hurts, you know. That hurts.”

After losing their brother once, Payne’s sisters refuse to see him lost to history. 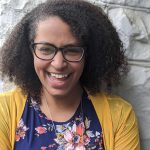 Laura Faith Kebede is a journalist and emerging public historian who freelances for the Institute for Public Service Reporting at the University of Memphis. She is a graduate of the University of Missouri School of Journalism and recently covered education in Memphis for Chalkbeat Tennessee.

A 14-year-old boy was playing basketball in a park near his home last year when a bullet fired from a passing car tore through...

As the federally owned utility struggles with its dual identity as a government agency and a competitive business, it rejects FOIA requests for salaries